How to use RSI?

How to use RSI? 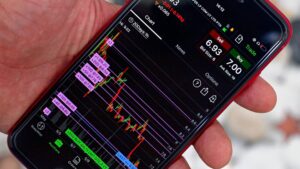 Among different useful oscillators which traders can identify, the Relative Strength Index – RSI is without a doubt one of the most popular, reliable and renowned momentum indicators. It’s well-known that most day traders and scalpers utilize RSI for getting optimal results and in a high reward-to-risk ratio. RSI provides information about the strength of the price movements on your charts, hence the name. How to use the RSI indicator in Forex? How to understand the information it provides? We’ll answer these questions below.

The Relative Strength Index (RSI) describes a momentum indicator that measures the magnitude of recent price changes in order to evaluate overbought or oversold conditions in the price of a stock or other asset. Originally developed by noted American technical analyst J. Welles Wilder Jr. who introduced the concept in his seminal 1978 book: “New Concepts in Technical Trading Systems”.

The RSI is displayed as an oscillator, which is a line graph that moves between two extremes. Its reading can range from 0 to 100. The primary trend of the stock or asset is an important tool used to ensure that the indicator’s readings are properly understood. Well-known market technician Constance Brown has widely promoted the idea that an oversold reading on the RSI that occurs in an uptrend is likely much higher than 30%, and an overbought reading on the RSI that occurs during a downtrend is much lower than 70%.

However, traditional interpretation and usage of the RSI dictates that values of 70 or above suggest that a security is becoming overbought or overvalued and may be primed for a trend reversal or corrective price pullback. An RSI reading of 30 or below indicates an oversold or undervalued condition.

The RSI is a fairly simple formula, but is difficult to explain without pages of examples. Refer to Wilder’s book for additional calculation information. The basic formula is:

The standard is to use 14 periods to calculate the initial RSI value.

As written above, in terms of market analysis and trading signals, when the RSI moves above the horizontal 30 reference level, it is viewed as a bullish indicator. Conversely, an RSI that dips below the horizontal 70 reference level is viewed as a bearish indicator. Since some assets are more volatile and move quicker than others, the values of 80 and 20 are also frequently-used overbought and oversold levels.

During uptrends, the RSI tends to remain more static than it does during downtrends. This makes sense because the RSI is measuring gains versus losses. In an uptrend, there will be more gains, keeping the RSI at higher levels. In a downtrend, the RSI will tend to stay at lower levels. During an uptrend, the RSI tends to stay above 30 and should frequently hit 70. During a downtrend, it is rare to see the RSI exceed 70, and the indicator frequently hits 30 or under.

These guidelines can help determine trend strength and spot potential reversals. For example, if the RSI isn’t able to reach 70 on a number of consecutive price swings during an uptrend, but then drops below 30, the trend has weakened and could be reversing lower. The reverse is true for a downtrend. If the downtrend is unable to reach 30 or below and then rallies above 70, that downtrend has weakened and could be reversing to the upside.

How to use the RSI indicator effectively?

As we already know the RSI indicator meaning and the crucial levels for it, let’s move on to the trading methods with the Relative Strength Index. The most common one is obviously using the overbought and oversold levels. If the RSI is less than 30, it means that the market is oversold, and that the price might eventually increase. Once the reversal is confirmed, a long position can be placed. Conversely, if the RSI is more than 70, it means that it’s overbought, and that the price might soon decline. After a confirmation of the reversal, a sell order can be placed. The 50 level is the midline that separates the upper (Bullish) and lower (Bearish) territories. In an uptrend, the RSI is usually above 50, while in a downtrend, it is below 50.

Another popular technique is using two Relative Strength Indices with different periods. To do that, you need to apply a short 5 period RSI (RSI 5) over the longer (default) 14 period RSI (RSI 14) and watch for crossovers. With the RSI 14, there are times when the market does not reach the oversold or overbought levels before a shifting direction occurs. A shorter period RSI is more reactive to recent price changes, so it can show early signs of reversals. When the RSI 5 crosses above the RSI 14, it means that recent prices are getting higher. A buy signal is then generated, and a 5 vs 14 cross should happen when the 5 period is oversold (below 30). When the RSI 5 crosses below and becomes lower than the RSI 14, it means that recent prices are declining. This is a sell signal. A 5 vs 14 cross should occur when the 5 period is overbought (above 80).

One more good idea for trading with the RSI indicator is to combine it with the price action. Any PA signals, such as candlesticks, chart patterns, trend lines, channels, when the market is oversold or overbought, can be extremely useful.

However, the RSI indicator can give many false or premature signals if used as a standalone tool. Even when combining it with other confirming studies, it is necessary to use a stop loss to protect losses on our trade. The optimal place for your stop loss order is beyond a recent swing top or bottom, created at the time of the reversal you are trading.

Furthermore, the basic RSI rule states that you should hold your trade until getting an opposite signal from the RSI indicator. But in the practical sense, it is a good idea to take your partial or full profits out earlier using other price action based rules or a trailing stop loss.