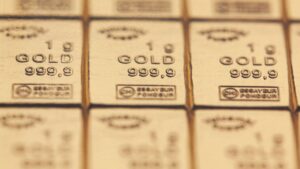 How to trade gold in Forex? Successful traders use every resource at their disposal to inform their trading and help them make profitable decisions that pay off in the short and long term. The first resource isn’t complicated, you just need to be aware of global news. Economic, political, and social changes can have huge effects on currencies and gold prices. Using world news to inform your trading is known as fundamental analysis.

The other important component is called technical analysis. This is about knowing how to read charts so you know where the market has been, where it is, and where it is going. Chart indicators tell you everything you need to know, as long as you can read them. Gold trading with Bollinger Bands can be really successful. It is a chart indicator that can be used to measure the volatility of a market. Let’s explain what Bollinger Bands are and how they can be used to enhance your online gold trading.

Bollinger Bands were created by investment manager John Bollinger in the early 1980s. The bands basically define high and low prices. The bands consist of three curves that are traced in relation to the price of a currency pairing. There are upper, middle, and lower bands, all drawn based on a given period of time (usually 20 periods) and two standard deviations. This means that the central line is a Simple Moving Average (SMA) with default value of 20, the lower band is two standard deviations lower than SMA and the upper one is two standard deviations above the SMA. Bollinger Bands contract and expand to let you know the activity on the market. When the bands squeeze, it shows you that the market is quiet. As the bands widen, it shows you that the market is active and the price is moving up.

How to trade with the Bollinger Bands? You need to know that prices tend to return toward the middle of the bands after reaching the top or bottom, which is called the Bollinger Bounce. So if you’re using Bollinger Bands as a technical indicator and see that prices are falling toward the lower band, you can expect the prices to bounce back up soon. If the prices are nearing the upper band, you can expect them to settle toward the middle band soon. So, as you can see, the upper and lower bands act like support and resistance levels.

However, when the bands squeeze together, it means that a breakout is about to happen. If you sense a Bollinger Band squeeze, you can catch a move and take advantage.

Bollinger Bands gold trading is rather simple. All you need to do is to use the lower and upper band as the support and resistance levels. When the closing price appears a little below the lower band, a wise move is to open a long position. When the closing price slightly crosses the upper band, it is a signal to open a short position. When the Bollinger Bands squeeze, it assures us that volatility is decreasing, and the best option is to wait for breakout to happen.

Where should you exit the trade? Probably the best idea is to place a take profit order near the middle line (SMA 20). It was explained above that prices tend to return toward the middle of the bands after reaching the top or bottom, which is called the Bollinger Bounce.

Bollinger Bands gold trading – is it a good strategy for beginners?

Absolutely. Bollinger Bands are very helpful, when it comes to gold trading. They are very easy to use and interpret the signals as well. What is more, the gold market usually doesn’t have any problems with liquidity, volatility is also often high, so there are many opportunities to trade with Bollinger Bands every week. The risk ratio when it comes to stop loss and take profit orders is rather favorable for a trader too, so money management shouldn’t be a problem using this strategy. Bollinger Bands chart is a standard and very popular indicator, so it should be available in every MetaTrader 4 (or MetaTrader 5) version.