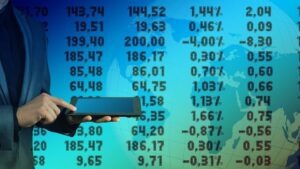 Nowadays, bored at home, many people are turning to the stock market and dabbling in day trading for entertainment and profits. Due to the coronavirus pandemic it has become extremely popular worldwide. Traders’ activity has increased dramatically in the first half of 2020 compared with 2019. It surely is a historic year for financial markets. Whether you planned to trade the biggest American indices, speculate on commodity markets like gold and crude oil, or buy and sell Bitcoin, this was a perfect year to do it and gain profits. So, what were the top 4 CFDs to trade? We’ll answer that question below, but first let’s explain why contracts for difference are so popular?

What makes CFDs so popular?

Contract for difference trading has a great number of benefits. For example the CFDs provide higher leverage than traditional trading. Standard leverage in the CFD market is subject to regulation. Nowadays, it is usually limited in a range of 3% (30:1 leverage) and could go up to 50% (2:1 leverage). Lower margin requirements mean less capital outlay for the trader/investor and greater potential returns. However, increased leverage can also magnify losses.

Moreover, most CFD brokers offer products in all the world’s major markets, allowing around-the-clock access. Investors can trade contracts for difference on a wide range of over 4,000 worldwide markets. Brokers currently also offer stock, index, treasury, currency, sector, and commodity contracts for difference. This enables speculators interested in diverse financial vehicles to trade CFDs as an alternative to exchanges.

That’s probably why the contracts are so popular. The prize for becoming a successful CFD trader is what lures most investors into the contracts for difference markets. Everyone has heard people talking about how much money can be made with CFD trading. Also, there are so many CFD ads almost everywhere in the internet, that people are obviously attracted by the promise of big gains.

The price of gold hit an all-time high in early August, eclipsing $2,075 per troy ounce. Uncertainty surrounding the Covid-19 pandemic and the possibility of new government lockdowns is the driving force behind the high gold price. For centuries, investors have turned to gold as a safe haven store of value during times of downturn, volatility or crisis. This year’s situation is no different.

Several factors influence 24-hour gold prices. The first two influences, inflation and supply, are intrinsically tied. This is because gold has an inherently limited supply, which rarely undergoes significant changes from one year to the next. Therefore, gold is treated as an inflation hedge. Gold prices are also influenced by fear and uncertainty in the market. To fight the contractionary effects of a recession, central banks inject liquidity into the financial system. Inflation is a necessary side effect of pumping an economy with cash, which lowers the value of each dollar. Periods of monetary easing diminish investor confidence in the strength of the dollar and increase the demand for gold, which is a safe-haven alternative to currencies and traditionally hold their value in weak economic environments.

During the pandemic, investors have flocked to gold bullion, gold stocks and exchange-traded funds to protect their wealth as trillions of dollars have flooded the U.S. economy in the form of quantitative easing and fiscal stimulus.

The crude oil market has been driven this year by concerns about oversupply, first as Saudi Arabia and Russia engaged in a price war and then as lockdowns to slow the spread of the Covid-19 pandemic disrupted demand. The International Energy Agency (IEA) estimates that global oil demand will total 91.7 million barrels per day this year, down by 8 per cent from 8.4 million barrels per day in 2019. The price for the US benchmark, West Texas Intermediate (WTI) crude oil, started the year around $61 per barrel. It turned negative for the first time ever during April at the height of pandemic-related lockdowns and has largely traded between $35 per barrel and $46 per barrel since May.

The Nasdaq 100 index plummeted to multi-year lows in early 2020 amid the Covid-19 pandemic but recovered all of its losses by early May. The Nasdaq trend continued with the index of tech giants setting new all-time highs almost every day in December. The Nasdaq 100 opened 2020 at around 8,870. Due to COVID-19 pandemic the index followed nearly every other asset class lower and plunged below the 7,000 mark in early March.

But by early May, the Nasdaq outlook improved after the index erased all of its 2020 losses. The work-from-home and stay-at-home phenomenon actually proved to be a catalyst for many of the big tech stocks. In consequence, it broke above 12,500 level in early December and it’s still holding above that level.

As soon as 2020 started, Bitcoin took off from its lows but a global pandemic caused asset valuations across all financial markets to plummet. Bitcoin dropped from $10,000 to $3,800 in March. However, the cryptocurrency has soared since then.

Back in May, Bitcoin underwent its third “halving”. It’s the event that happens every four years when the reward that Bitcoin “miners” receive for mining bitcoin (using expensive computers to upload bundles of Bitcoin transaction records to the bitcoin blockchain) gets cut in half as a built-in mechanism to slow the creation of new Bitcoins and limit bitcoin’s supply. The new mining reward is 6.25 bitcoins per block; from 2016 until 2020 it was 12.5 Bitcoins. Historically, the Halving itself does not prompt an immediate spike in the Bitcoin price. After the 2012 Halving, bitcoin saw a marginal increase over a few weeks, then went on a massive ride in the next months. This year, the price increased slightly in the days after the Halving, and by two weeks later had dropped below where it was before the Halving.

Since then, another big climb has started. One common take on Bitcoin’s strong gains during the pandemic is that quantitative easing actions by the U.S. Federal Reserve and stimulus programs by governments around the world have been good for Bitcoin because they underscore its scarcity. There will only ever be 21 million Bitcoin created, so the supply is capped, and bitcoin has no central governing body that could step in and pump out more. Bitcoin jumped big in the days after Election Day (when a winner was still not clear) because it thrives when there is mainstream economic uncertainty. Then it climbed further once it became clear Democrat Joe Biden would win, since it increased the likelihood of another imminent pandemic stimulus package. As the thinking goes, government monetary aid strengthens the appeal of Bitcoin. On the 30th of November, Bitcoin hit a new all-time high of $19 860 topping the previous high from December 2017.

What trading instruments can be popular in 2021?

2020 has been the sort of year that makes people naturally look forward to 2021. Even though the stock market has done well this year, it’s come with dramatic volatility. During the last month of 2020, experts are starting to come out with their stock market projections for 2021. And there’s a lot of optimism among their forecasts. Those who want a better 2021 can look to a pair of bullish calls from prominent analysts. Morgan Stanley projected that the S&P 500 will rise to 3,900 by December 2021. That’s up from its initial estimate of 3,350, which didn’t extend quite as far into next year. JPMorgan Chase has an even more optimistic view on what’s coming. Based on a quantitative model that incorporates macroeconomic factors and relative valuations across asset classes, JPMorgan set a target of nearly 4,200 for the S&P 500.

Making positive predictions about the stock market is usually a safe bet, because stocks generally rise more often than they fall. That doesn’t mean that the gains will come easily. When history looks back at 2020’s stock market performance, positive returns might well mask the level of volatility that pervaded the market. Hopefully, 2021 won’t bring the huge surprises that 2020 did. Yet no matter what happens, the key to keeping your sanity is to remember your long-term strategic vision for stock market investing and not get swayed by short-term moves. If you can do that, you’ll be well on your way to starting off 2021 on the right foot.

The Bitcoin predictions look even more interesting. The risky underpinnings of cryptocurrency markets will appeal to traders and investors in 2021, according to analysts from Bloomberg. “A risk-off decline like the 1Q could return Bitcoin towards the $10,000 support level in 2021, but we believe the path of least resistance remains higher,” the analysts wrote. In simple words, investors will continue to embrace the risk and price volatility inherent in Bitcoin investing in 2021. Bloomberg analysts have predicted a price target of $50,000 for Bitcoin, implying a $1 trillion market cap for the cryptocurrency. They cite increased demand for the cryptocurrency, mainstream adoption and interest, and diminished supply as Bitcoin reaches its 21 million supply target as reasons for their estimated price.